peace: what is it and why does it matter

The members of the Society of Jesus (Jesuits) in Africa and Madagascar have organized a series of talks, the first of its kind, targeting young people on the continent.

The speaker at the inaugural virtual event slated for Saturday, July 18 has, in an interview with ACI Africa, explained why the talk series, organized by the leadership of the Jesuits in Africa and Madagascar (JCAM), will be focusing on African youth.

The youth “constitute our greatest resource as a people,” Jesuit Fr. Augostine Edan Ekeno told ACI Africa Wednesday, July 15 and added in reference to young people in Africa, “They are a blessing that God has given humanity for its continuity and prosperity.”

He identified the need to enlighten young people about the meaning of “true peace” to guarantee peace across the globe as one of the reasons for targeting the youth in the planned series of talks that are part of the Pax Africana initiative, a project by Ignatian Youth Networks Initiating Generational Outcomes (IYNIGO), which is the youth leadership development scheme of the Ghana-based Arrupe Jesuit Institute (AJI).

“If we want a peaceful world, that means we must invest in broadening the imagination of our youth to understand what true peace really is and why it matters,” Fr. Augostine who is based in South Sudan’s Rumbek Diocese told ACI Africa.

Another reason for targeting young people in Africa is because “they have been neglected,” Fr. Augostine who is the Director of Multi-Educational and Agricultural Jesuit Institute of South Sudan (MAJIS) that also integrates peace and reconciliation programs said.

He likened the youth in Africa to “the crowds in the Gospel of Matthew that Jesus saw and had compassion for they were like ‘sheep without a shepherd’.”

The Jesuit Cleric attributed the fact of young people in Africa being neglected to the “relationship crisis” in modern times between parents and children.

“We all know that the relationship which is supposed to exist between parents and their children is not there as it used to be. In fact, many people will tell you that that relationship is in a crisis,” Fr. Augostine said.

He explained, “Many parents have neglected their responsibilities of forming and educating the young people on how to be responsible. Many parents have gone into exile from forming their children. Even our educational institutions today have ceased to offer education for life and adjusted themselves to mere centers for producing students perceived to be ‘smart’ intellectually.”

The talk series initiative is meant to do what parents in African traditional settings did, Fr. Augostine noted, explaining, “As Jesuits, we are seizing this opportunity to fill that gap by accompanying the youths. We hope to fulfill this task by engaging the young people in ways that can help them embrace the core values which can enable them to build peace and face modern challenges.”

Organized under the theme, “African Youth Sowing the Seeds of Peace,” the talk series aim at providing “a virtual platform for education on peace, targeted principally at young people across the African continent,” a report on JCAM website indicates.

On July 18, Fr. Augostine is expected to speak on the topic, “Peace: What is it and why does it matter.” 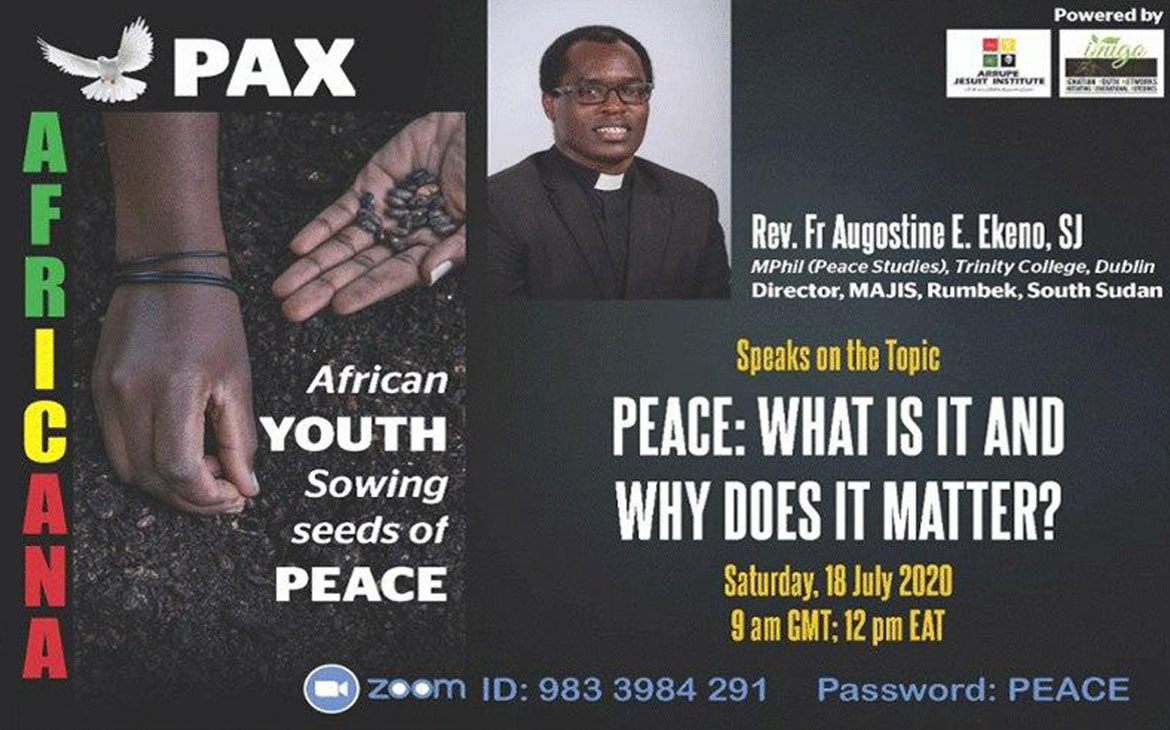 During the July 15 interview with ACI Africa, Fr. Augostine who is the Parish Priest of St. Teresa Parish in South Sudan’s Rumbek Diocese expressed the hope that the July 18 virtual event will provide a forum for interactions that will help the youth across Africa to build “a culture of encounter” and the exchange good ideas, fostering a mutual sharing of experiences of peace and how best young people can build a peaceful and just world.

He also hopes that the July 18 forum will be characterized by interactions that contribute to the building of a “reflective and connected generation that can honestly seek to stand up for one another regardless of their tribes, clans, nationalities or religion.”

The virtual event is also targeting the youth as a fulfillment of one of the four Jesuit Universal Apostolic Preferences, which calls on members of the 486-year-old Religious Order to journey with the youth, Fr. Aogostine said.

“In response to the preference on journeying with our youth, AJI is therefore using the launching of these series of talks as an opportunity to sow the seed of peace on the fertile terrains that are the souls of our young people,” the Jesuit Cleric whose ministry in Rumbek Diocese since 2017 involves daily interactions with young people in South Sudan told ACI Africa.

He hopes the July 18 event will help the young people in Africa “appreciate the fact that they constitute the most productive and gifted generation with the potential to transform society” and “learn that it is possible to achieve peace.”

He also hopes that the youth can learn “that peace cannot be achieved in Africa unless they resist to be exploited by enemies of peace that want them to fight wars and conflicts they do not understand.”

“As Jesuits working in Africa, we are concerned about the harm and destruction caused by illegal guns in the hands of civilians,” Fr. Aogostine told ACI Africa, noting that the talk series seeks to complement efforts of Jesuits in Africa and Madagascar  to join the African Union’s (AU) campaign on “Silencing the Guns in Africa by 2020.”