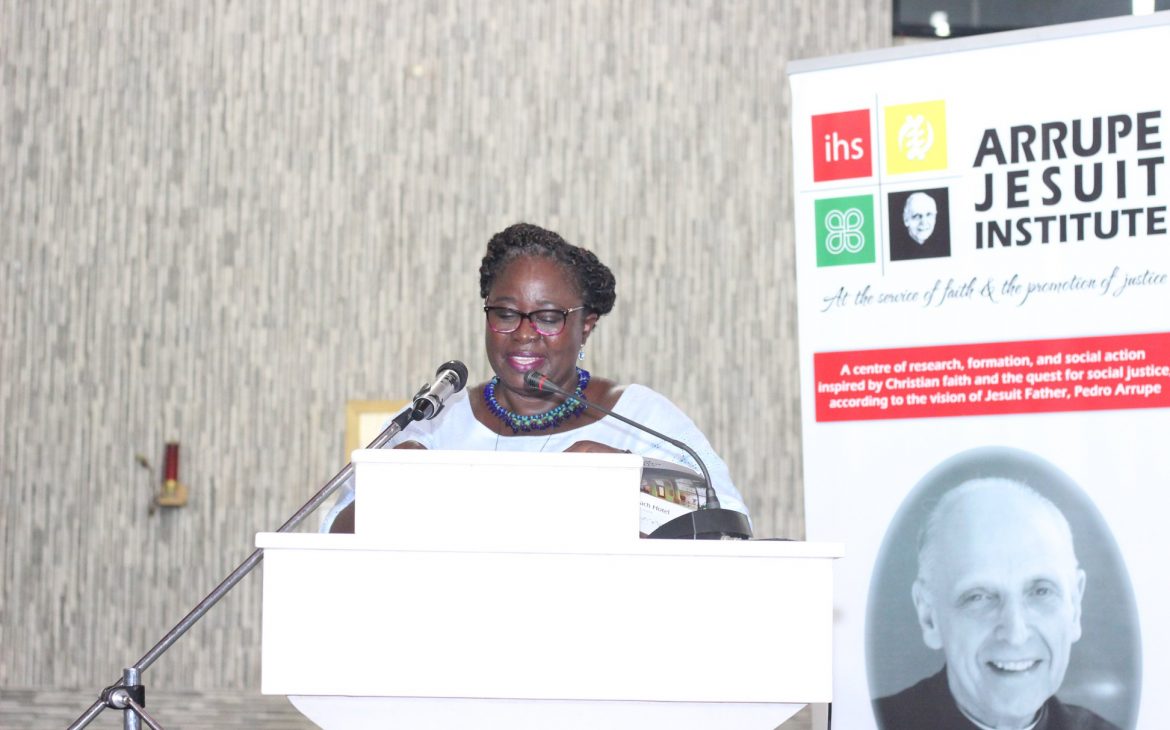 Mrs. Peggy Dzodzomenyo, a retired Director of Bank of Ghana was the first speaker for this year’s series. She served the Bank of Ghana for 31 years and retired as the Director and Head of Banking Operations in 2018. She is a staunch catholic, has served the church in many capacities and is currently very passionately involved in the building of the cathedral in Donkorkrom. She is an apostle of the Sacred Heart Confraternity, a Marian Devotee and a Eucharistic Minister of Christ the King Parish.

The 2nd edition of the Advent Lecture Series, “Faith in Public Life” got off to a great start on Tuesday December 3, 2019 at the Christ the King Catholic Church. The Series is an annual program organized by the Arrupe Jesuit Institute in collaboration with the Christ the King Catholic church where public servants who have excelled in their line of work are invited to share how their faith helped them serve in public service.

She stated that she graciously accepted to speak at this year’s series because she saw it as an opportunity to evangelize. Speaking about her faith, she said she makes it a point to always attend mass, recite the creed daily, and pray the Divine Mercy. She encouraged all present not to be mere reciters of the Chaplet of the Divine Mercy but practice it by showing mercy to others. She also urged them to read the catechism of the church to be well grounded in the Catholic faith.

She shared her experience at the Bank of Ghana and how her faith helped her keep her life in balance. She highlighted some key values she stood by, and they are: Honesty, forgiveness, being fair and just and showing compassion. She recounted that her faith was tested a few times but she was able to stand her ground. She cited one of such instances when she was called to the disciplinary committee to speak on a theft case that had occurred in her department.  She stated that she thought of the common good of the institution and spoke the truth. She was ready to endure challenges she would face afterwards. However, through her honesty, the institution was able to strengthen its processes to prevent similar cases from occurring.

One of the most challenging aspects of her job she said, was assessment, she said: ‘As a director, one of the most challenging periods for me was the period of assessment which is carried out biannually. It was difficult because you have to see yourself as a judge, and you have people under you that you have to judge fairly to reflect their performance. You had to do it dispassionately and that was one of the difficult moments for me.’ She advised people in top positions to use their power to influence others positively. She lastly stressed on the need for them to be compassionate towards their subordinates.

In addition, she admonished all to learn to forgive and reconcile with work colleagues they were at loggerheads with. She narrated one of such experiences where took advantage of a New Year well-wishing tradition of going round all the offices within her department to shake hands with a colleague she had issues with. She stated that “He was surprised because he thought I should be the last person to wish him. You won’t believe it, two weeks later we heard he was involved in an accident and he died.” She added that at that moment of sadness, she felt very much at peace with herself for reconciling with him before his unfortunate demise.

The day of the lecture also marked the birthday of the speaker; the Arrupe Jesuit Institute surprised her with a beautiful cake. The program ended with the cutting of the cake and some photographs. The Advent Lecture Series will continue on Tuesday December, 10 2019, with Justice Amma Gaisie, a Court of Appeal Judge being the speaker. Ambassador Parker Allotey will close this year’s series on Tuesday December, 17 with his experience.