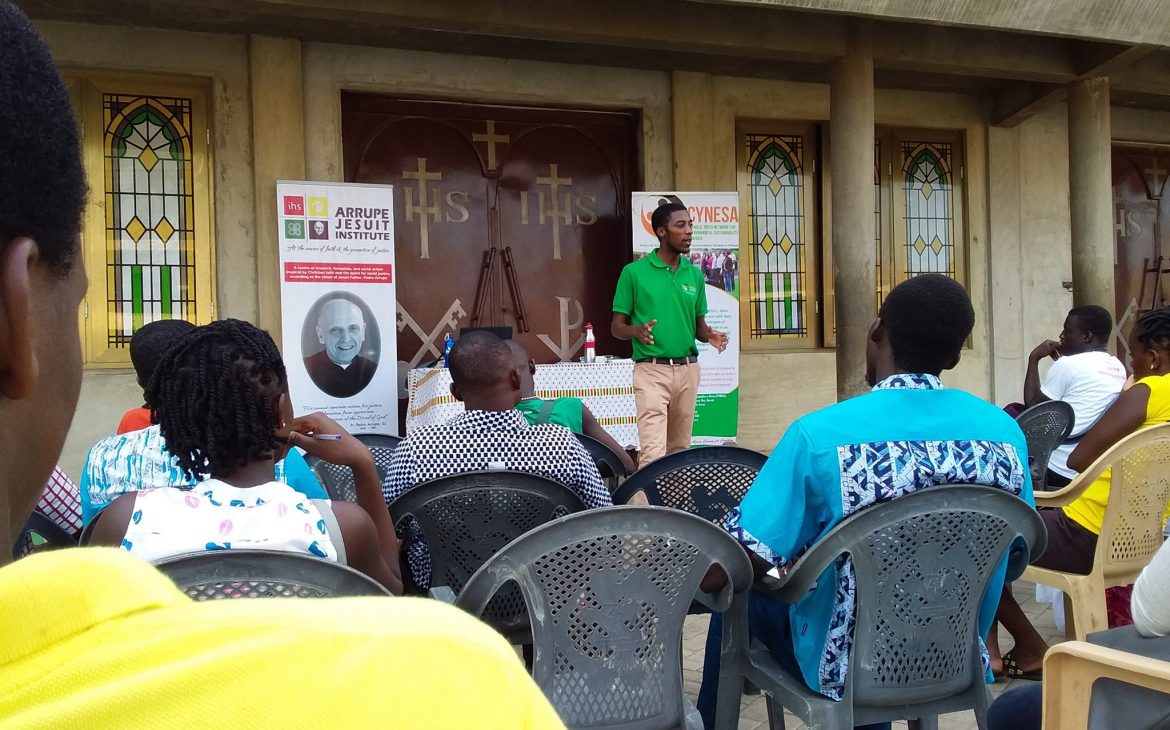 “An evening chitchat about climate change (with coconut refreshment)”, is not your ordinary title for an event meant to explore one of the most serious and urgent issues of our time. Nevertheless, about 30 young people turned up at St. Ignatius Catholic Church, Baatsonaa in Accra, Sunday 24th March, for what turned out to be a lively evening filled with robust discussions about how young people can ramp up climate action in their communities.

The event was one of the first fruits of the partnership between the Arrupe Jesuit Institute (AJI) and CYNESA. Benoit Musabyimana (CYNESA Rwanda Country Director) and Allen Ottaro (CYNESA Executive Director), had earlier that week, held promising discussions with Fr. Kpanie Addy, SJ (Founding Director of AJI), about establishing a CYNESA chapter in Ghana. AJI is a centre of research, formation and social action, inspired by Christian faith and the quest for social justice, motivated by the vision of Fr. Pedro Arrupe. Pedro Arrupe the 28th Superior General of the Jesuits (1965-1983), is described as “a man who undertook with decisiveness and energy a path of drawing near to people in their concrete situations, whether of unbelief, poverty, lack of freedom or search for God”.

Inspired by the encyclical Laudato Si, participants at the event discussed and committed to practical actions to care for our common home, from reducing plastic use, to conserving water and energy. Benoit Musabyimana shared concrete experiences, about how CYNESA Rwanda has mobilized young Catholics in tree growing projects in and around Kigali, and Rwanda’s success in enforcing plastic ban. A young climate scientist, Emmanuel Nyadzi, highlighted the impacts of climate change in Ghana, and encouraged the audience to make simple changes in their day to day lives, which cumulatively, will contribute to resolving the climate crisis. Fr. Kpanie invited the young people to keep the conversation going beyond the event, and promised that AJI and CYNESA would facilitate similar events in the near future.